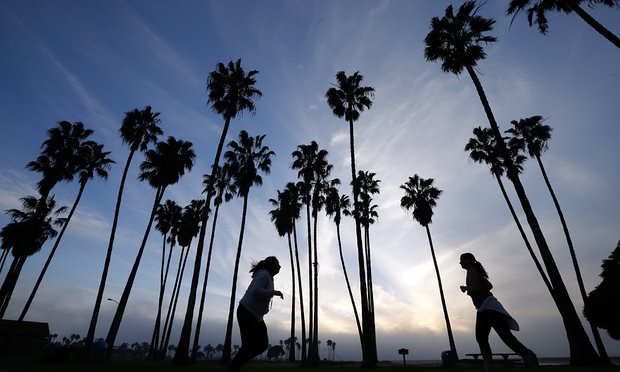 California city’s bipartisan push to embrace clean energy such as solar and wind while paring back greenhouse gas emissions may be a model for rest of the US.

As presidential nominees Ted Cruz and Donald Trump, respectively, call climate change a “religion” or a “bullshit … total hoax” dreamed up by China, it is deeply unfashionable for any Republican to take the issue seriously, let alone push for radical reforms to remedy it.  Kevin Faulconer, the mayor of San Diego, could therefore qualify as one of the most outlandish, as well as green-tinged, Republicans in the US. Faulconer has thrown his weight behind a binding plan to make San Diego run on 100% renewable power by 2035 – the largest American city to have such an ambition.

Faulconer is as much a product of his largely liberal surrounds as he is of his party, of course. The 49-year-old mayor will march for LGBT pride and supports a path to US citizenship for undocumented immigrants.  But San Diego’s bipartisan push to embrace clean energy such as solar and wind, while radically paring back greenhouse gas emissions by 80% by 2050, is a glimpse into how the rancorous brawls over climate change could have been avoided across the rest of the US.

"This isn’t a partisan issue,” Faulconer told the Guardian. “I’ve said from the very beginning there’s enough partisan politics at the national level. I was a volunteer for our parks before becoming mayor; I love our natural resources, our beaches and landscapes. I feel strongly about protecting them.”

While Republicans, including Florida senator Marco Rubio, have warned any action to cut emissions will raise power bills and lead to economic ruin, Faulconer has sold a vision of low-carbon innovation, jobs and clean air. San Diego’s business community is now on board, although Faulconer admitted it took “a lot of persuasion”.  “I pride myself on being fiscally responsible and environmentally conscious,” he said. “The two aren’t exclusive. I’ve never seen it as a zero sum game. We want a plan that is ambitious and leads the way for the rest of the country.”

A plan endorsed unanimously by San Diego’s Democrat-dominated council in December would see America’s eighth largest city transformed into one riddled by bicycles and public transport, with roofs swathed in solar panels. The city will switch half its fleet of vehicles to electric power, and almost all the methane from sewage and water treatment will be recycled.  A key selling point for the plan is the resulting jobs and investment in clean energy – San Diego ranks second in the US in electrical output from solar energy, and the city is openly courting clean tech firms to set up shop there. It already derives 40% of its power from clean sources. But public concern about climate change is also a key driver.

“People have seen and felt the drought, the wildfires, the flooding,” said Nicole Capretz, who wrote the first iteration of the climate plan before the controversial exit of previous mayor Bob Filner. “People were witnessing a lot of things in their backyard. When you see your quality of life is at risk, people start to wake up and say ‘it’s time.’”  “The beautiful part about having a Republican mayor embrace this plan,” she added, “is that he did outreach to his own friends and factions and persuaded them it was the right thing to do for economic reasons.”

There remain hurdles for San Diego to clear. An implementation plan has yet to be finalized but much will rest upon an intervention into the electricity market. San Diego’s utility has said it cannot meet the 100% renewable goal itself, meaning that the city will have to branch out to source its power elsewhere while the utility retains control over poles and wires.  “There’s a battle brewing on that,” Capretz admitted. “It’s the largest part of the climate plan – we can’t get to the goal without it.”

On the plus side, the 2035 decarbonization plan is legally binding, unlike the aspirations of other large cities. And some measures should be straightforward to achieve, such as an initiative to increase San Diego’s tree canopy cover to 35%, which would soak up carbon and help cool the city with more shade.  Improvements to train and bike infrastructure should also prove popular, but a price tag has yet to be put on this. It’s likely that help from Californian or federal coffers will be required.

Regardless of whether the target is met, San Diego is among a large group of cities impatient with federal government bickering over climate change. Municipalities from New York to San Francisco have goals to either majorly or completely switch to renewable energy, while Michael Bloomberg, the former New York mayor, has spearheaded an international coalition of mayors that is looking to wean urban areas off fossil fuels.

While a record number of nations have signed up to cut emissions, there is still a significant gap between their pledged action and what is required to avoid the worst ravages of climate change, such as drought, extreme weather events and sea level rise. Faulconer said this shortfall can be plugged, in part, by cities taking the lead.

“Cities are leading the federal government, yes,” he said. “They are leading on innovation and policy. The technology is advancing incredibly quickly. We need to have our eyes wide open on this.”