Could wind power ever meet the world’s energy needs?

At the moment, wind power supplies about 4.1 percent of electric power in the United States. Still a bit player. Yet there's a whole lot of untapped wind left in the world. Wind whipping through the Great Plains. Wind gusting off the shores. Wind circulating high up in the sky. So what would happen if we tried to harvest all of that wind?

We'd have enough energy to power the world. At least in theory. A new study published this week in Nature Climate Change finds that there's enough wind potential both on the Earth's surface and up in the atmosphere to power human civilization 100 times over. Right now, humans use about 18 terawatts of power worldwide. And, technically, the study found, we could extract about 400 terawatts of wind power from the Earth's surface and 1,800 terawatts of power from the upper atmosphere.

This isn't what's likely ' just what's possible. As Kate Marvel, a researcher at Lawrence Livermore National Laboratory, explains, this paper mainly looks at wind power's maximum potential. "We were looking at the geophysical limits of what the Earth could handle," Marvel says. "We didn't necessarily restrict our study to what was feasible." (Marvel co-authored the study with Ken Caldeira and Ben Kravitz of the Carnegie Institution for Science.)

Even the most optimistic near-term projections for wind power, however, tend to be more restrained. In 2008, the U.S. Department of Energy released a comprehensive report estimating that wind power could provide, at most, 20 percent of U.S. electricity by 2030. And for that to happen, the cost of wind power would have to keep plunging, the number of turbines built would have to steadily increase by about 14 percent each year, and utilities would have to build new transmission lines to accommodate the extra energy.

What's more, electric-grid operators would have to figure out how to juggle a power source that isn't quite as reliable as the coal and gas plants of old. That's not an impossible task. As Stanford's Christina Archer and Mark Jacobson showed in a 2007 modeling study of the United States, the wind is always blowing somewhere in the country, which means that if enough wind farms are linked together, they can provide lots of steady baseload power. But building that infrastructure can be difficult ' Germany is currently struggling to upgrade its grid to accommodate a surge of new wind and solar farms.

Rather than get bogged down in these logistical details, however, the new Nature Climate Change paper set its sights far higher. For one, it doesn't just look at wind potential near the Earth's surface, as past studies have done. The study also asks how much wind energy could be extracted from higher altitudes. Various companies are now working on designs for wind turbines that can float high in the air, on kites or balloons. Since the wind is steadier and stronger high up in the atmosphere, that's a tantalizing resource ' if the technology could work.

True, humans would eventually run into a physical limit on how much wind energy could be harnessed. Wind turbines work by creating resistance or drag, slowing the wind's momentum. Put up enough turbines, and the wind will slow down too much. What's more, the change in global circulation could, in theory, muck with the climate. (Previous modeling studies, including one by David Keith in 2004, had raised the possibility that large-scale wind harvesting might alter global rainfall patterns.)

Yet the Nature Climate Change study suggests that neither of these things will be a problem for a long, long time. Humans could sustainably extract up to 2,200 terawatts of power from surface and atmospheric winds before bumping into physical limits. That's 100 times as much power as the world uses today. What's more, if the world ever harnessed that much wind, the temperature of the Earth would shift by only about 0.1°C and precipitation would shift by less than 1 percent. "It's not a big deal, basically," says Marvel.

Marvel says the next step for this sort of research will be to restrict the analysis to wind-turbine locations that are technically feasible. For now, however, it's safe to say that there's enough wind potential to meet the world's demand many times over, at least in the abstract. "[I]t seems that the future of wind energy," the study concludes, "will be determined by economic, political and technical constraints, rather than global geophysical limits." 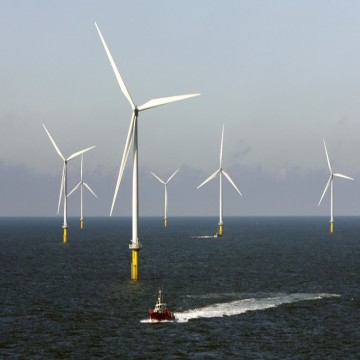